What is Black gum Disease? 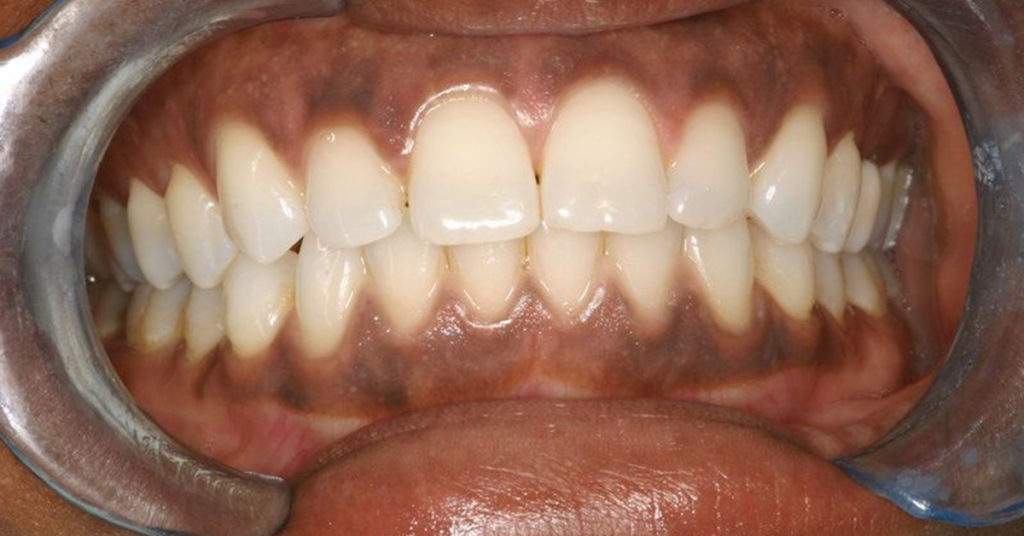 Healthy gum tissue isn’t always pink. Just like skin colour, gum colour varies between different people. Dark patches on gums may also be the result of a variety of factors like medication side effects or tobacco use. Black gums aren’t necessarily a sign of an oral health issue, but seek your dentist if you’re interested in cosmetic treatments for very dark gums.  Melanin is the dark pigment that gives skin its colour is also present in gum tissue. This pigment naturally darkens the gums. The variation in colour can be on one side or both sides of the mouth, and it can be uniform or in patches. Melanin pigmentation of the gums is normal, and no treatment is required. If the darkening of gums is not something that is hereditary, it could be a precursor to an oral disease and consultation with the dentist is suggested.

Many people have experienced periodontal disease, which is a disease of the gums and surrounding tissues. Periodontal diseases, such as gingivitis, can normally be treated with good hygiene and proper dental care. Black gum disease, or necrotizing periodontal disease, however, is an uncommon but serious form of gum disease that requires immediate treatment. The disease kills the gums, tissues and bones that surround the teeth and can be indicative of serious health problems.

Smoking can cause many side effects inside the mouth, including dark gums. The nicotine in tobacco activates the melanin-producing cells, leading to darker gums. Quitting smoking may help reduce this dark pigmentation. Sometimes, black gums can be a sign of something more serious. A black spot on the gums could be a type of oral cancer known as malignant melanoma. If you notice this type of lesion, see your dentist.

Acute necrotizing ulcerative gingivitis is a gum infection that is also known as trench mouth. It causes fever, painful gums, and bad-smelling breath. An infection can cause black or grey gums if a layer of dead tissue builds up over the gums. Trench mouth results from the rapid growth of bacteria in the mouth, usually due to gingivitis. Bacteria may build up because of poor oral hygiene, stress, lack of sleep, or an unhealthy diet. Early symptoms of trench mouth include bleeding gums, bad breath, lots of saliva in the mouth, and feeling ill. Ulcers may form on the gums at the edge of the teeth.

The symptoms of this serious disease normally present rapidly, which is why it is often known as acute necrotizing periodontal disease, and it may bring a sudden onset of:

Additionally, because black gum disease causes pain and difficulty in chewing and eating, recent weight loss or malnutrition can also be symptoms.

Black gum disease is caused by an infection in the gums. Many types of bacteria commonly exist in the mouth and most are harmless. Poor hygiene can cause the harmful bacteria in the mouth to flourish. Sometimes these bacteria can cause an infection in the gums and result in black gum disease. Normally, a healthy immune system can fight this infection, which is why this condition is typically found in people with a compromised immune system. People who have AIDS or are HIV positive, have extreme stress, use tobacco, are malnourished or have poorly controlled diabetes are at a higher risk of getting black gum disease.